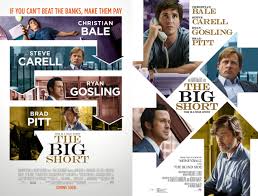 In a Hollywood feature length film that covers financial corruption and the consequences that surround it, The Big Short portrays the lives of good and intelligent people that are pitted against unconscionable mortgage investors and the people who are being exploited by them. Steve Carrell (who appears to be transitioning to dramatic roles very well) is the lead of an ensemble cast tells the story of the people who were aware of troubles in the housing market before the now infamous Global Financial Crisis. Praise has to go to the scriptwriters who were very talented to balance just enough comedy into this dramatic script, something that a movie has not done that well since Argo.

The Big Short follows is a film that follows three stories that never interweave yet all share a common thread: They all figure on an educated hunch that that an economic collapse would happen due to an excess of sub-prime mortgaging. These characters decide to invest more then a billion dollars collectively that there will be a bust in the housing economy. If they win, they get ridiculously rich, if they lose, they are beyond broke. The people who are in on the scheme are Michael Burry (Christian Bale) a character with a glass eye and social disorder but is genius at number crunching; Mark Baum (Steve Carrell) a bitter hedge fund manager and Ben Rickart (Brad Pitt) who mentors two young investors to getting very rich.

All of the films characters are played convincingly as they play the antiheroes of the financial industry. All of these characters in their own way despise the system and yet still have faith in it. Steve Carrell is not one to be underestimated in playing dramatic roles, in the film Foxcatcher he plays a convincing character that is believable and he holds his own in The Big Short. He plays a bitter and cynical hedge fund manager who believes he is alone in a world where people did not see a reason to be worried or upset about how the economy would affect them. The same is said for Brad Pitts character Ben Rickart who despite leaving the financial world due to the nature of it, helps two young investors profit off it .

This film has a behind the scenes dramatization of the brokers in the housing industry that are responsible for loan lending to people that would unlikely be able to pay the debt back (sub-primal mortgaging). This film shows these people as lively and flamboyant, living in a hedonistic lifestyle with no remorse for the people they exploit. For me, this was a perspective into the one percent that is the investors of Wall Street. It was an easy and carefree life that only when it is realized how they obtained the life in the first place did this film show how wrong it actually was. It was jarring to see how these people saw their ends and justified it by their means.

Director Adam McKay is also stepping outside his comfort zone by directing a drama film (albeit mixed with comedy) for the first time and is a natural at it. This film draws lots of aspects of filmmaking very well. They mix the comedy and the drama together very well by using comedy sporadically to help drive the drama in the film. They also draw real life facts of these events and blend it in with filmmaking finesse to create a film that ends up being engaging and entertaining. There are also funny explanations of economic jargon such as “sub primal loans” and “collateralized debt obligations” through celebrity cameos and the constant breaking of the fourth wall. They also serve to help a casual audience to understand the complexities in the housing market.

If anyone is curious or interested about the events of the Global Financial Crisis and then this is a good film for anyone to see. ****1/4