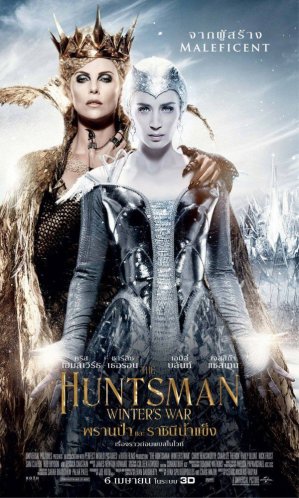 If there is any thought that comes to my mind when watching some blockbuster movies it’s this: sometimes less is more. The Huntsman: Winter’s War has melded in with the hundreds of blockbusters that fit into this category. That is not a good thing. Like those films that fit into the “less should be more” category The Huntsman: Winter’s War has all the decor, the costumes, the settings, the actors, the design and the professionalism but it only has a thinly veiled storyline that further suffers from cliches and blatant rip-offs from other movies. Like all the major blockbusters that have come before it, The Huntsman has the rhythm but no music.

The film starts off with Eric (Chris Hemsworth) and Sara (Jessica Chastain) who love each other in a society conditioned to hate. Freya (Emily Blunt) (who is The Ice Queen) rules over her kingdom and forbids love. Freya herself is manipulated by her older sister Ravenna (Charlize Theron). Eric and Sara learn of Snow Whites Magic mirror contains pure evil. Eric and Sara agree that Freya and Ravenna must not get the mirror to prevent her from gaining absolute power.

I know there are is a massive audience out there who after the fun and forgettable movies. They think that I am a negative reviewer for not liking these films. Personally, I love the fun but hate the forgettable. However, I am going to do something that I have never done before for a film I did not like: I am going to start off by explicitly saying what I did like first.

The costume designers deserve a raise. All the designs perfectly fit the character’s personalities. The acting was also good, especially from Charlize Theron portraying the villainous Ravenna . She commanded attention in the form of a whisper. She got people to listen intently to the mundane things she was probably told to say.

The little people (I am not sure if that is the politically correct term but I mean no offense) are pretty decent in adding the comedic elements in the movie. They got the wittiest and best bits of dialogue in this movie. Their banter and comedic timing was great. Maybe in an alternative universe, there may be a comedic spin-off movie based on them. I can only wish. The story itself, albeit weak, was easy to follow so no headaches on that aspect and the CGI was actually ok. Unfortunately, all I have mentioned are the appetizers of the film and when the main course arrives, all good things come to an end.

“The Huntsman: Winter’s War” suffers from an annoying amount of cliches, making it very predictable. Scene after scene I could tell what was going to happen based on the law of movie cliches. Here is one movie cliche law: When the comedic character in a drama discovers and foils a booby trap and says something like “Lucky we didn’t fall for that trap” The characters will immediately fall into a bigger trap. That was one of the many cliches that happened in the movie. Worse still is when I know were a film “borrowed” their source material from.

I must start this paragraph with a word of advice to aspiring filmmakers. It’s natural to use films as inspiration to create original ideas. However, if you must resort to taking plot devices from other movies and presenting them like it’s your own, it would be best to take your source material from old or obscure movies. Therefore, you reduce the odds of people noticing that you copied ideas from other movies.

I say this because it was transparently clear that The Huntsman: Winter’s War was taking ideas from very obscure sources and using them as their own. These obscure sources include the movies Frozen, Harry Potter (The Prisoner of Azkaban specifically) , The Lord of the Rings franchise, The Chronicles of Narnia: The Lion, the Witch and The Wardrobe and Romeo and Juliet. All movies that I am absolutely sure no one has ever heard of. The story was also not original but at least the execution of the story was.

Aside from the previous issues I have mentioned the most important piece to any puzzle has to be the story which, I am sad to say, was uninspired. The story and execution have been overused for decades, centuries even. It tries to cover the age old question “does love really conquer all?” said by the evil Ravenna to which the ruggedly handsome Eric responds “No, but it can conquer you” I may use that line if a philosophy student asks me that question to see the reaction.

As you can see for my review The Huntsman: Winter’s War is actually good in the acting and production departments but falls short on what any good movie does: a good, consistent, original story. *3/4