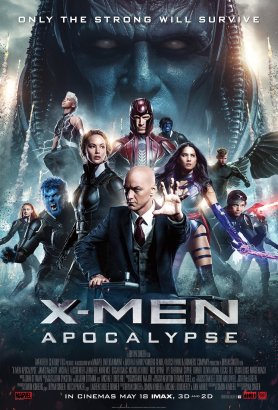 Call me vapid and shallow, but the first thing I don’t like about the movie poster is James McAvoy’s bold head as he plays the role of Charles Xavier. It is like Dwayne Johnson having hair down to his lower back. Nevertheless, the X-Men are back for the seventh time (or eight, depending on how you are counting) to try and save the world from evil once again. I tried to do my homework and read about what happened in the other X-Men movies but the way the series have bounced around in time and settings is confusing for me. If you can understand the X-Men timeline, more power to you.

X-Men Apocalypse is not terrible, nor is it any good. It has some moments of good acting and one great scene, but also suffers from a thin plot expanded and stretched out to 144 minutes. There are moments of CGI in this movie, but sometimes the CGI was used as a crutch more than the tool. There were good actors in X-Men Apocalypse but some of the actors were used as a tool more than the crutch!

Oscar Issac plays The Apocalypse (the mutant, not the eschatological theory) has recently been reborn for thousands of years and plans a new world order with four recruits whom he calls The Four Housemen (get it!). Of course, it is up to the young X-Men, Professor X (James McAvoy) and Raven (Jennifer Lawrence) to stop The Four Horsemen and The Apocalypse from destroying mankind.

I believe the premise of this movie is quite overdone in superhero movies where the villain wants to destroy the world while the heroes try to stop him, but there are some good moments in this story. They have two subplots in this movie that had potential but were not used to their fullest.

A part of this problem has to do with a classic case too many character syndrome and the constant darting to and from different locations and sets. There are two characteristics a movie has to fulfill to get too many character syndrome in my opinion. 1. Have more than 5 main characters and 2. Not giving many of them much of a purpose in the movie (that being no character development, no integral part in the story or not entertaining in any way) Some of these superheroes are used just to show their superpowers and others are used for one scene while contributing next to nothing for the rest of the movie (This includes one of the major characters in the franchise). It was hard to focus on all of them at once.

The other major problem is darting from one location to another frequently. This gave off the illusion of disorganization and/or messy editing. I counted six different countries this movie was set and the filmmakers kept on darting around all of those countries in the movie. It really felt like a mess from that perspective.

Nevertheless, the story was clear and concise despite the fact it went for too long. There is one great scene in the movie in terms of pure entertainment that involves Quicksilver when he uses his powers a Xavier’s mansion. What transpires from that scene is awesome and that is all I am going to say about it. By far and away, I think that it was the most entertaining scene in the movie.

As an aside, I also like some of the actors, particularly James McAvoy as Charles bald head aside. He was good at playing the comforting teacher of the mutants and playing the father figure. I also liked the performance of Oscar Issac as The Apocalypse as he was very good at being an intense supervillain. Both of these characters were portrayed with a certain calmness in their roles as they engaged with certainty I was engaged in that calmness to a surprisingly effective degree.

I am going to give this movie an extra star for using a Metallica song in the movie (which is ‘The Four Horsemen”, who would have thought) and I am going to subtract a star for the movie destroying the Sydney Opera House (that is unimportant to the plot. Trust me) Now I have no reason to take the train to Circular Quey anymore. So at the end of the day, this movie gains no bonus marks.

Overall X-Men: The Apocalypse is not going to be a great film because the unwarranted length made it boring and any subplots that would have had meaning was subverted by run-of-the-mill action sequences. X-Men The Apocalypse was saved from disaster by a couple of good scenes and some decent acting, but I wasn’t that overjoyed from seeing it as I left the theater. Still better than Batman Vs. Superman though **1/2