So the news has broken that The Rock is the highest paid entertainer of 2016, earning $64.5 million a year. Apparently, this is a social injustice because Jennifer Lawrence is making $46 million dollars a year. The reason that is an injustice is because apparently because she is a woman and she has suffered from gender discrimination according to various news outlets. But is this case a good example of gender discrimination in Hollywood?

No, it isn’t because this is an example of one simple economic principle:

The law of demand.

There are many factors that should determine a person’s salary and it mainly falls under the umbrella of market demand. Demand is how much people are willing to pay for a product. I admit that I don’t know all the factors on how Hollywood determines salaries. What I do know is some factors that would contribute to it.

Ever wonder why advertisers pay upwards of two million dollars for thirty seconds of ad space during the Superbowl? That’s because 100 million people have their eyes glued to the screen (called “reach” in the advertising industry). It would be stupid to pay two million dollars to a channel that brings in 50,000 people at 2p.m.

I set you guys up with this because it establishes that the more exposure you have AND the more popular you are, the more people will pay money to see you or buy your product. If you look at the Facebook and Twitter followers The Rock has 56 million and 10.4 million respectively. If you look at Jennifer Lawrence’s Facebook and Twitter followers (16 million and 458,000 respectively) there is a massive gap.

I know this is only one metric but from this alone ask yourself this “Should I be paying person A the same about as person B despite the fact person B has at least 3.5 times the reach person A has?” If you would say “Yes” to that question I recommend that you don’t run a business in real life. 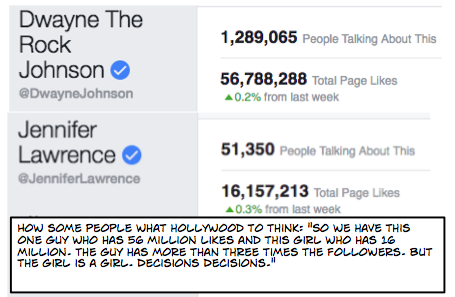 Dwayne Johnson made considerably more money at the box office than Jennifer Lawrence did last year. I believe he almost single-handedly revitalized The Fast and The Furious franchise when he was in Fast Five. People had revitalized interest in the franchise because of who he was and are dominant physique made people think there was a villain that posed a legitimate badass threat because he was more muscular than Vin Diesel. Last year, Furious 7 made $1.5 billion. This fact will be very important later on.

As I have already established, in any business, to make more money you have to convince the guy who is giving you the paychecks why you deserve the raise. It is possible to persuade them to do that if you can convince that guy that you will be more valuable to the company within the next 12 months.

In that case, I can imagine Dwayne Johnson’s pitch last year for $64 million in a nutshell:
“See how Furious 7 made $1.5 billion dollars. Well in 2016 I will be filming a sequel to that movie. Because it has such a strong following, I should make an easy $700 million at the box office even if Fast 8 movie is utter shit. I can clear the $1 billion mark if it’s a critical and commercial success due to positive word of mouth. I have proven to be a major factor in the franchise’s renowned success and have 56 million Facebook followers right on my doorstep that I can advertise and market the movie too.”

He is also filming Baywatch with Zack Efron which is easily I guessing another $300 million. If this guy is likely to draw $1 billion at the box office next year from what he films this year and he is one of the main reasons that people pay to watch those movies, why wouldn’t you pay a little more than a twentieth the amount he is likely to draw?

Jennifer Lawrence has to take a different route. I guessing the reason she is getting paid less than last year is because the franchise that drew her the most money at the box office has ended. Even though she has produced critical and commercial successes (which is why she is still valuable) I would argue she will not draw as much Dwayne Johnson will next year.

Her route is to prove to Hollywood that she is still a bankable star that can make at least $400 million dollars wherever she goes if that is her goal. She needs to prove to Hollywood executives that she was not a flavor of the month with The Hungar Games franchise and that she is versatile. If she can do that next year, expect a pay bump from her in 2017-2018. She cannot do that by being in the X-men franchise as some would believe because of factor number four.

4. How Much of an Influence the Actor Has to the Box Office. 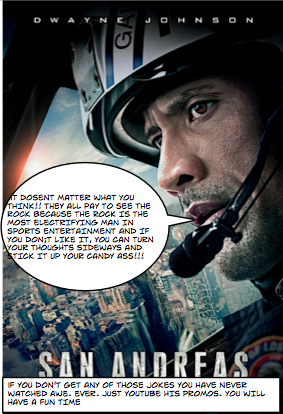 If I was an extra in Captain America Civil War (Villian #17), Avatar, Titanic (Perished Civilian #57) and Star Wars Episode 7: The Force Awakens (Stormtrooper #108), will I be paid $64 million? No.

Jennifer Lawrence has been in superhero movies like the X-Men franchise but people pay to see the X-Men as a whole, not her exclusively.

In the case of X-men, the whole is more valuable than the sum of the parts. In Dwayne Johnson’s case, his parts are more valuable to making the whole. It is a subtle but highly distinct difference that can mean millions and millions of dollars in Hollywood.

My Conclusion to this “Wage Gap/Gender Inequality” Case

I believe that there is has been a wage gap in Hollywood due to gender discrimination. When you look at the metrics, in this case, it really starts to make sense why Dwayne Johnson is paid more. That is because he is more valuable because there is a higher demand for him than Jennifer Lawrence. It’s not bad, it’s not good, it’s just the way it is right now. That could change in the future.

I just know from reading stories from the news and people comments on the internet over several years. I found that it is easier for people to point fingers and blame something else rather than the reality of the situation. It makes more money and it makes people feel better about themselves. Reassuring lies are easier to digest than inconvenient truths. These articles are living proof of that and are one of the many, many examples throughout the time pool of human existence.

To prove my point, while people cry in outrage about a person earning $46 million not being paid $67 million, that kid in Bangladesh who makes many shoes that sell for 100 bucks a pop probably make 10 cents an hour living in inhospitable conditions and signing contracts in another language just to live a better life. I digress because that is not real news. That is not the inequality that people want to hear. It’s a social injustice that is not unjust enough. It’s the people who live the lives we all dream about we should feel sorry for.