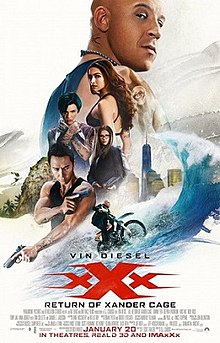 The first 20 seconds of this movie consisted of a satellite dropping down and crashing to earth. I then asked myself “Shouldn’t that satellite have disintegrated upon re-entry?”

This movie was like a comedian suffering a mental breakdown halfway through their act. You wouldn’t know if this was part of the act. Then you realize it isn’t a part of the act and you have this sudden rush of concern and disappointment.

This is why I have to give it a negative review. I don’t know its intentions and therefore I don’t know how to take it. If this film intends to be a stupid as it comes off, I would be more open to it than if it was trying to take itself seriously.

As I said, I think that the humor was unintentional (I think) which is why this movie isn’t ingenious. To prove to you how stupid and unintentionally funny it is, I will reveal a segment from the first half of the movie:

It is established that Xander Cage has a girlfriend in the Dominican Republic. That girl has never seen again in the movie.

10 minutes later, Xander is trying to hook up with a girl in London. She brushes him off by saying “9 out of 10 sexual relationships fail to last”

Xander Cage responds with “But I know you like to gamble”.

She says she is not a gambler but instead gives him 7 girls to have sex with.

After Gage beds all of the women, Cage smiles at the camera before saying “The things I do for this country”

Don’t worry, this movie has a broader range of unintentional comedic stupidity. You have motorbikes that work like jet skis riding on the oceans and riding the tubes like surfboards. You also have Cage traversing down a jungle using skis, risking his life so he can connect a cable so his community would have TV reception.

F.Scott Fraiser is the scripwriter. This is the first film I have seen of his work. If he writes stories like this reguarly, he will be one of the worst scriptwriters on this planet.

If you are into campy movies. Watch the first half of the movie (up to and including the motorbike jet-ski scene) and then leave. It rivals with The Room in its unintentional comedy.

This is, so far, the funniest movie that I am giving a negative review. *1/2