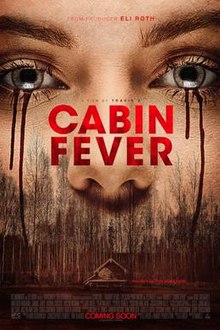 Cabin Fever is one of the laziest movies I have ever seen. It feels as cheap as the movie poster that it’s advertised upon. I wrote in my review of Oujia that it was a pleasantly surprising like a four-year-old who colours in a picture inside the lines with shading. Cabin Fever is like a kid who couldn’t be bothered to colour the picture in their colouring in a book so the mother photocopied the image and claimed it was their child’s work.

Yes, that paragraph is more allegorical as it seems. You see Cabin Fever is a remake of Eli Roth’s own movie shot-for-shot from a director called Travis Z. That should ring alarm bells. It’s even worse considering Roth’s original was a terrible movie in the first place.

Because of that, I don’t mind spoiling the whole movie for you. This movie is about a group of teenagers that rent out a cabin by a lake. Throughout the film there a people bleeding all over the place, which is the fever hinted at in the title (the blood looked like paint). Slowly, the teenagers get infected and most of them die until the main protagonist realizes the disease exists solely in the water.

Now aside from the blatant ripoff of Eil Roth ripping off his own movie, you also have to see the DVD menu of this movie (Yes I rented. I do things old school) On the DVD menu it has the same picture of the woman weeping bleed but with the cottage and the colours are washed out (not to build the suspense. It just looks bland). The only option I could select is “Play Feature”. That’s right. No “Set Up” no “Special Features” and not even “Scene Selection”. Just “Play Feature”. If “Play Feature” the only option it begs the question “Why is there a title card in the first place”

The way I have described the setup for this movie sounds attractive for the people who are into campy “so-bad-it’s-good” movies. If only it were that interesting. That’s because Cabin Fever is made just competently enough that there are no intentional laughs in its cinematic ineptitude. The acting is atrocious, yet it is so bland that I couldn’t laugh at it, The “scares” in the movie are not scary at all, and the music is always amplified when a “scary scene” comes up. The only reason I could identify there was a scary scene was because of the music.

Oh and speaking of music, Cabin Fever puts loud distorted music with no build up. Sometimes it was during scenes where the sketchy characters were exchanging dialogue. The music was muffling out the sounds and the words the characters were making. I went for the subtitles, but wouldn’t you know there are no subtitles available.

Cabin Fever is the laziest movie of the year. No question. It’s even lazier than comedies where the actors improvise. It’s even lazier than Norm of the North. This movie is not scary, nor entertaining, nor is it written well. It even goes so far to somehow mess up the sound and it’s too lazy to even have “Scene Selection” on its title menu. It is such a terrible cash grab from Eli Roth and he even failed at that. This movie only grossed approximately $40,000. It has a 0% rating on Rotten Tomatoes.

Cabin Fever is one of the rare films where absolutely no one wins and everyone loses. It is a void-like abyss. There is nothing on the screen to like and it’s not even because it was too gory (The gory scenes looked so fake that I didn’t care). Cabin Fever has gone beyond the realms of terrible and has made itself irredeemable in the lazy film making atrocity that was passed off as a theatrical release -***