I think the only reason it did not happen at my screening (It was packed) was because no one was brave enough to start it. Myself included. La La Land is a movie with high ambition that cleared every bar it sets out to achieve in spades.

The film is a story about Mia (Emma Stone) who is an aspiring actress and Sebastian (Ryan Gosling) who is a jazz enthusiast. They develop a relationship which is tested by their own carriers as they life in the glamor of the Hollywood.

Because of how La La Land is shot, it is easy to be swept away. Director Damien Chazelle went for unrestrained romanticism with a ton of upbeat energy. This style can become easily tiresome but it works because I have not seen anything quite like La La Land. He must have spent ages perfecting the movie’s tone.

La La Land is the kind of gem that it’s impossible to pinpoint the best scene as you are watching it. The movie always seems to trump itself. I thought the second scene “Somewhere in the Crowd” was going to be the best scene. There were about six scenes that were better (especially the finale). It is rare for any movie to have one great scene. La La Land was one great scene after another and it feels like one long stupendous sequence.

The chemistry between Stone and Gosling is so charming it is nuts. The amount of talent that radiates between them separately is enough, let alone the two together. They have so much class and talent. Gosling knows how to play the piano and stone knows how to sing and tap dance. The both, with their talents, created a story that gave a new meaning to an old ending.

There are dozens of other things to praise La La Land for such as the colorful costumes, the seamless camerawork, the songs and the camaraderie which helped make an old story feel brand new.

Chezelle has achieved something magnificent here. He has shown the glitz and glamor of old school Hollywood and makes it look like the focal point of La La Land when it reality it is about the struggles of success and realizing that life is not as perfect as the exterior he masterfully presents.

Chezelle is like the antihero of his generation of filmmakers that has gained mainstream acceptance. He is against the grain but has cleverly made his way into the minds the major film studio executives. He won’t change their minds, but he was in the picture after Whiplash. Now they would have wholly accepted him after La La Land.

Judging from his movies, Chezelle has a huge artistic vision that can now be easily funded and executed. He is guaranteed to make whatever he wants for his next effort, have a lot of artistic freedom and easily get millions of dollars to support it. Something most directors only dream about. ⭐⭐⭐⭐⭐ 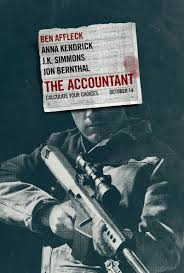 The premise itself is a bit laughable. Affleck plays Christian Wolff, a natural at accounting who does financial dealings with some of the worst corrupt criminals around the world. He is also an excellent marksman and combat fighter. Oh and he is autistic as well. Wolfe is told to work at a legal business called “Living Robotics” to keep a low profile from the CIA. While there, he meets Dana Cummings (Anna Kendrick) and as they both find a gaping hole in “Living Robitics” accounting system the action kicks in. The premise wouldn’t be laughable if the movie tackled it’s themes head-on but it doesn’t.

The problem is not Ben Affleck’s performance but the character that he has to play. Because Affleck’s character is autistic, Affleck deliberately plays him in an antisocial manner. He is stone-faced expressionless throughout the whole movie (even when he is fighting and killing) crosses his arms a lot and speaks in a forced monotone.

I really did not get much out of watching The Accountant. Especially when there are no narrative stakes because Affleck can easily kill bad guys without a struggle or an expression from his expressionless face. Aside from scenes from Affleck and Kendrick (which weren’t that many) and the flashback of Affleck’s character as a child, there was nothing I enjoyed.

Subplots and Twists that Never Add Up

The second problem is the movie’s scattershot layout with threads of subplots that don’t meet up. The subplots don’t gel well with the main story and they are convoluted messes that don’t add up. One of the subplots involves police detective Ray King (JK Simmons) who blackmails an analyst to help him with the case of finding who “The Accountant” is. This investigation cost countless lives and SPOILER ALERT at the end King reveals the investigation was all a test. I was just stunned. END OF SPOILERS

Maybe I am the autistic kid watching the movie because I heard from other reviewers as the one’s I heard said it was funny because it was deliberately bad. I saw no humor in it whatsoever. It was played out as a serious film with a confusing plot that slows down by act two so I then was confused and board.

What was really bewildering were the final reveals. Jesus Christ, they were godawful. They were jaw-dropping for all the wrong reasons. Not only did they not add up and not only were they overly cliched but they were fantastically stupid. I swear to God it is more unbelievable than the twist in The Tourist with Johnny Depp and Angelina Jolie. It’s that bad.

The cliff notes in closing: Ben Affleck is a good actor but his role is horrible; Affleck is good with Kendrick and that’s it; The story is confusing and the twists are god-awfully dumb and the momentum is screeched to a halt halfway through. The likable elements to the film were not enough for me to recommend it. It was really disappointing for me to watch expecting so much but getting so little. *1/2