Pepper Pig: The Movie is a film where pie will be thrown in my face. Why? Well, I, a 21-year-old man, went to the cheapest cinema in New South Wales at a 9:30 am session. I was miraculously on my own with no parents and kids. At that point, I reflected on what I was doing in my life, feeling as if watching kids show for 3-5 years olds on the big screen on my own was sad as hell.

Nevertheless, I was anticipating that as a movie, Pepper Pig will do me justice. It does do justice to all the five-year-olds at least. This movie is not even a movie. It is 73 minutes long and the movie is separated is 5-10 minute skits alternating between animation and live action Pepper Pig.

The story of the movie is all about Pepper Pig’s journeys and experiences around Australia and England. Pepper Pig and her family learn to surf, throw boomerangs, travel in a submarine and a double decker bus. All the kiddy kid stuff that kids enjoy.

I understand why the filmmakers made the movie the way it is. The short run time and skits exist because a young child has a small attention span. Still, using that logic, they literally have more of an attention span than a person who exclusively uses Snapchat. The entire movie is unabashedly enthusiastic because they want children to be constantly happy all the time.

The problem with Pepper Pig the Movie is there is noooooooooooo crossover appeal. This is where my review of this movie as a critic turns into armageddon.

There is a girl called Daisy (Emma Grace Arends) who is in all the live action skits. She is fine in what she has to do. She is a mixture (and an amplification of) Deadpool and Giselle from Enchanted. She breaks the fourth wall constantly while having 1000% enthusiasm without ever looking like she has any self-awareness. That is the standard procedure if you appeal to little kids. Believe it or not, I did not mind this until she instructed the kids on what to do.

These next two paragraphs will descend into near fan fiction. You have been warned.

The Abattoir is Near 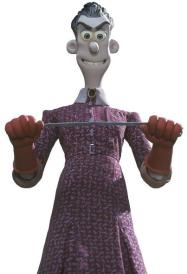 As the only person in the cinema, It was as if she was talking directly to me. She wanted me to quack like a duck or pull the anchor off Pepper Pig’s ship. The worst one was when she wanted me to act like a monkey. Every time she did this I sunk in my seat as there was a massively awkward vibe in the large empty room. What made it worse was is that she would constantly say “You can do (insert action/imitation here) better” before accentuating the action/imitation she wanted me to perform. It was like a stand-up comedian dying on stage and thinking if he repeated the same joke but louder, it would be funnier.

Knowing that Pepper Pig was a 73-minute film beforehand, I decided to check my watch, thinking (and praying) there was not long left. Only 30 minutes went by. Less than half the movie was over. I lost patience and checked every five minutes hoping to God. HOPING TO GOD that it was over. Then I felt embarrassed that people would see me leave a Pepper Pig screening on my own. Walking up the ramp was like walking the greenest of green miles.

While Pepper Pig is inherently better than Monster Trucks (as the movie is not ludicrously disorganized and tries to teach kids to interact with the world and their surroundings) I cannot in good faith say I enjoyed Pepper Pig. The positives were easy to find and give it some value but that experience was not fun. One star for the learning aspect of Pepper Pig, the other for  Emma Grace Arends NO MORE **

P.S. Sorry that it has been awhile since my last posting. There was nothing new on this week (exept for pepper pig) at my local multiplex. I was also sick too 🙂 The next couple of days I more than make it up for you readers.