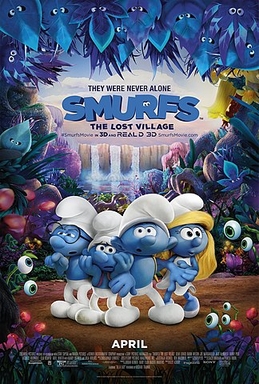 Smurfs: The Lost Village is mildly surprising because it half-works. It has a somewhat cohesive story about a female Smurf called Smurfette (Demi Lovato) who travels to new places in an attempt to find herself (which sounds like a lot of young adults today) and overcomes adversity along the way. There was even a bit (but not a ton of) character development in Smurfette as well.

The animation wasn’t terrible either. The animation is bright and colorful without being oversaturated and garish. I was actually surprised how little my eyes hurt and how my mind wasn’t offended by any bad CGI. It was almost as if The Smurf : The Lost Village was trying to be good. It was surprising that I found redeeming qualities about this movie that are important to the story.

However the Smurfs : The Lost Village has its fair share of bad. Mainly the predictability of the plot and the cliches were mildly annoying. This story is a standard cliff notes/ mad libs book of a Disney narrative. Smurfs: The Lost Village pulls out all the tired tropes of kids movies (loud music, bad jokes, Disney-action plot points etc) and does so unabashedly. At least the movie doesn’t botch the execution. However, it was so predictable that at one point I decided to close my eyes for 5 minutes to see if I missed anything. I missed nothing.

Overall my reaction to Smurfs: The Lost Village is one of indifference. There is no passionate hate or love of the movie. Despite that, If I said I was indifferent to Smurfs: The Lost village, it tells you that this is the best Smurfs movie by default. It definitly exceeded expectations but that dosen’t mean it was spectactular in the slightest **3/4