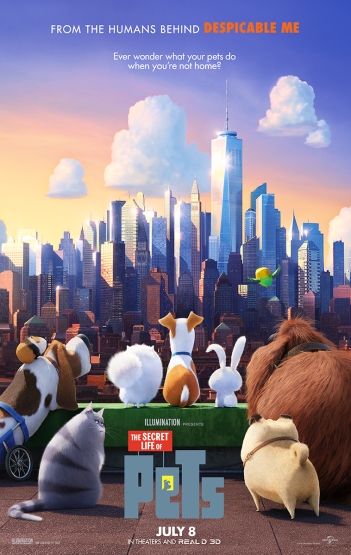 If there’s a time the makers of Minions should be appealing to kids, now would be that time. The Secret Lives of Pets is a movie that achieves the sole purpose of keeping the kids occupied for two hours while the adults smile because the kids are happy. I think The Secret live of Pets is fine. Just fine.

The story follows a dog called Max (Louis CK) who loves his owner Katie (Ellie Kemper) until she gets a new dog called Duke (Eric Stonestreet). Through a complex series of events, they get lost in New York City. Both Max and Duke try to find their way home and the neighboring animals including Gidgit (Jeny Slate) who’s Max’s love interest.

Does the premise sound too familiar? A tad formulaic? Well, the movie is just that at its core. However, it is covered with surgery, surgery sweetness that makes the pill easier to swallow.

This movie almost exactly reminds me of watching Angry Birds. They both have vibrant and colorful animation and the story flows in a nice linear fashion. Both movies also have likable characters but both movies lack something animation itself cannot fix: substance and meaning. What both have in common is they both were entertaining enough to watch that made me feel ok by the end.

Comedically speaking, The Secret Lives of Pets has nothing that you can take away from unless you have never owned a dog. There are so many dog gags that it gets too repetitive. From Max instinctually surrendering by rolling on his back to dogs chewing shoes and finally to dogs getting distracted by a ball. This is the level of humor that permeates this movie. While that is not bad, it doesn’t offer anything new to the doggy bowl.

The movie borrows from many animal movies over the decades through its premise of animals going through the low life of the streets while comically bumbling their way through to reach their ultimate goal. Unfortunately, The Secret Lives of Pets does not add anything new in that department either.

The animation and cinematography are top notch.

What is so good about The Secret Lives of Pets is the colorful, vibrant animation and the sweeping cinematography that gives the movie it’s positive energy. There are landscape shots of New York city that are both beautiful and overwhelming. There are also shots where the movie sweeps up, down and around New York like we are looking through the eyes of a swooping bird that was pleasing to the eyes.

The overall sound is good to listen to.

Illumination Entertainment has hired the right people to do the voice overs for their roles. Kevin Hart sounds great playing Snowball the bunny. I thought Jenny Slate had the perfect voice to accompany Gidget the little white dog. Slate also voiced the antagonistic mayor in Zootopia, though she is much more fitting for the role here. The sound of all the voice acting was unusually crystal clear which is good.

The Secret Life of Pets also has a musical selection that fits with the movie’s tone. Bright, happy and adventurous are the words to describe not only the music or the movie but the elements that Illumination constantly strive for in their filmmaking. They succeed at hitting those goals but they can only get you so far.

There is nothing wrong with The Secret Lives of Pets, it’s just now with the standards of quality filmmaking and storytelling that people are used to in animation the movie feels like a “less than” movie. The movie is good for the weekend but Illumination Entertainment is sticking to their comfort zones, which you cannot do for long before the animation world passes by. Maybe Sing will make me change my mind for the company later this year. I hope it does. ***

P.S. Shoutout to Dana Carvey who is the Pops in the movie. He is finally recovering from the movie The Master of Disaster and Jack and Crack. He spent years away from the limelight to focus on his family. It’s about time he made a successful comeback 🙂